I can’t help but be incredibly moved by stories of human rescue and triumph. It taps into something deep.

I can still recall crying at my desk at FDIC in the summer of 2002, reading about the Quecreek Mine Rescue online. Those nine men were trapped for 78 hours and were rescued alive. Rejoice!

So, how much more special will it be if / when the Chilean miners are rescued! The 33 of them have been trapped in a mine in Chile since August 5. They are living in an approximately 500-square-foot space. (See this diagram on CNN.com.)

For the first 18 days after the mine collapse, no one knew if they were alright. And then, finally, a drill punctured the top of the space and the miners attached a note that said, roughly translated, “There are 33 of us and we are alive in a refuge.” 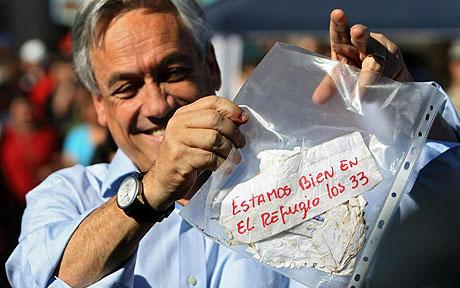 President Sebastian Pinera holds up the first communication with the miners after the mine collapse. (AP)

The media loves stories like this, they are sensational for all the right reasons. CNN has been doing its share of coverage, and the BBC is reportedly sending a crew of 25 to cover the rescue.

There is a part of me, however, that knows that these men are not saints — none of us are. That their families have problems like the rest of us. And I sort of appreciate that the tabloid media tells that side of the story. Though, I do feel silly when tears are running down my face as I read about the details of the ongoing rescue and then I come across this:

“Some of the men’s wives have had another unpleasant surprise – running into their husbands’ girlfriends at the camp above ground,” according to the Daily Mail.

Humans will be humans. A little drama at the camps. We can all rejoice with them anyway.

Receive email updates to this blog